Ahsinger was never supposed to be a gymnast.

"My mom, an artistic gymnast, she always got hurt. So she was like 'I don't want her doing artistic!' and my dad said, 'Ok, fine.'"

But her father had a hunch that gymnastics would improve his three-year-old daughter’s balance and coordination, which was so bad that she was constantly running into walls and furniture. He snuck her to a gymnastics class and when the pair came home, Ahsinger announced to her mother, “I want to go to the Olympics!”

“She goes, ‘What are you talking about?!’ Ahsinger recalled with a laugh. “I was jumping around, and I knew what the Olympics were because everyone talks about it and it was always there, and the entire time I was like ‘I want to go to the Olympics!’… My mom was like, ‘Ok this is good! She’ll learn how to balance and stay on her feet, and won’t run into things.’”

It turned out that Ahsinger’s clumsiness stemmed from bad vision and she needed glasses more than gymnastics, but she was hooked on the sport. She started out training in three different gymnastics disciplines: individual trampoline, tumbling and double mini trampoline. By 2011 she had dropped tumbling, but her coach advised her to narrow her focus even further.

“Nicole, if you want to be someone you gotta do trampoline, just stick with trampoline,” Ahsinger remembered her coach telling her.

Her coach was proven right a few years later, when Ahsinger  had a stellar 2014: first she won gold at the Junior Pan American Championships a few days before her sixteenth birthday, then finished first again at the U.S. Elite Challenge (junior division). Her results qualified her for the 2014 Youth Olympic Games in Nanjing, China.

“I didn’t even think I had a shot at the Youth Olympics,” Ahsinger said. “Then my name kept on popping up and I won Pan Ams, and then I won Elite Challenge. After I got off the trampoline [a coach] was like, ‘Hey, you made Youth Olympics!’ and I was like, ‘What?!’ The big highlight was being able to go and travel there, which was awesome because I never had gone to China before.”

Ahsinger described her qualifications routines as “sub-par” but advanced through with the top eight trampolinists to the final round. Performing a slightly less difficult routine than normal, Ahsinger got through it cleanly and finished fifth.

A year later, Ahsinger joined the senior trampoline ranks and left her family and coach in San Diego, California to move to Lafayette, Louisiana. She had already begun working with Dimitri Poliaroush a few years before when a family crisis prevented her local coach, Scott Roscoe, from traveling to competitions with her. But video sessions and week-long training trips weren’t enough, so Ahsinger decided to move so she could train with Poliaroush, a two-time Olympian, full-time.

At her world championships debut in 2015, Ahsinger finished 33rd in the qualifications round. Charlotte Drury  finished 11th and was then chosen a few months later to compete at the Rio Test Event—the final qualifying competition for the Rio Olympics. With Ahsinger nervously cheering her on from Louisiana, Drury hit her routines and earned one Olympic berth for the U.S. in women’s trampoline.

Drury and Ahsinger shared the podium a few weeks later at the 2016 Elite Challenge. The competition was the second of three meets that would be used to determine which trampoline athletes, one male and one female, would represent the U.S. at the Olympics.

Olympic hopefuls Drury and Dooley came in first at the Elite Challenge in Colorado Springs, Colo.

The day before the national championships were to begin, Drury crashed in practice and broke her foot. She wouldn’t be able to compete. Ahsinger was now the leader in Olympic selection points, followed by Shaylee Dunavin with one point.

Ahsinger took the lead after night one of competition, with Dunavin not far behind.  After finishing up her qualification routines, Ahsinger said she’s doing  her best to not focus on the Olympic berth that’s up for grabs.

But before the final night of competition, Ahsinger had a rush of confidence.

18-year-old Ahsinger was named to the Olympic team, finally making her childhood proclamation of “I want to go to the Olympics!” come true.

The "Rhode to Rio" ended for the U.S. trampoline athletes after the Olympic team was announced in Providence, Rhode Island.

"I'm very excited but I'm also still in shock, I don't think it's hit me yet. Someone just said, 'Nicole, you're an Olympian!' and I was like, 'Wait, what?!' It has not hit me at all. But I'm very excited to show I'm capable of in the next few months."

When Ahsinger leaves training at the end of the day, she doesn’t go home and talk about trampoline. Which is a little surprising considering she lives with three other trampoline athletes: Dunavin, Dakota Earnest and Sarah Webster.

When Ahsinger decided to move to Louisiana in 2015 to work with Poliaroush, the plan was to live alone. But then a few other athletes followed her lead, and they ended up sharing a house—like having their very own trampoline sorority.

“It wouldn’t be what you expect,” Ahsinger said. “We don’t talk about trampoline. We’re not thinking ‘Oh, the Olympics,’ we’re just training. Some days we hate it, some days we love it! But we never sit down and talk about our skills. We’re just basically regular people living in a house by ourselves training.”

As Dunavin finished second behind Ahsinger according to the Olympic selection procedures, Dunavin will also travel to the Rio Olympics to serve as the non-competing alternate. It’s another dream come true for the pair.

“When we were little we used to be really close,” Ahsinger said, “and I’d be like ‘What if we lived together?’ and then she was like ‘Yeah, that’d be awesome.’ And now we do live together. And then I was like, ‘What if we go to the Olympics?’ Now that’s a reality. It’s really weird.”

The women's trampoline qualifications and final will take place on Friday, August 12th at 1:00 p.m. ET and can be watched live on NBCOlympics.com.

Who is... Logan Dooley

Twice an Olympic alternate, the 28-year-old trampolinist will finally make his Olympic debut in Rio.

From the high-flying medalists to the sideline action, the top trampoline photos from the 2012 London Olympics. 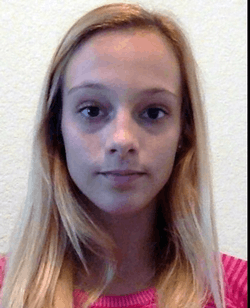