From Yun Sung-Bin’s historic gold to Lizzy Yarnold’s repeat, the skeleton did not disappoint in PyeongChang. Here are the best moments from the 2018 Winter Games:

In front of a raucous home crowd, Yun not only won the first Olympic medal for South Korea in a sliding event (luge, bobsled, skeleton), he won gold in dominant fashion.

It was more than the home crowd, the home announcers couldn’t believe Yun’s historic performance.

Yarnold became the first woman to win two medals in skeleton, and both her medals are gold. She was down by 0.02 seconds heading into the final run, but set a course record to take gold again.

Uhlaender might not have won the medal she was chasing in PyeongChang, but she slid valiantly. She was gracious about her Olympic experience. “It’s been a rollercoaster,” She said, “and that’s why I’m left feeling as though I’m not done. I wanted to walk away waying I’d done everything, maximized my potential … I just want to come here and be an athlete. I did that the best I could. I’m smiling.”

Daly, like Uhlaender, was hoping to improve on his fourth-place finish from Sochi. Like Uhlaender, however, he also struggled. He didn’t let it ruin his Olympics, though.

Frimpong became the first African athlete to compete in skeleton, and he had fun doing it.

Adeagbo became the first African woman to compete in the skeleton. The Nigerian women had a team in bobsled, too, making it an historic games for the African nation.

Watson may have been “freezing to death” in PyeongChang, but he hopes other Jamaican athletes will follow in his footsteps in Winter Olympic sports.

The helmets, the wonderful helmets

Team USA’s skeleton was cheering on the U.S. curling team before it won gold. 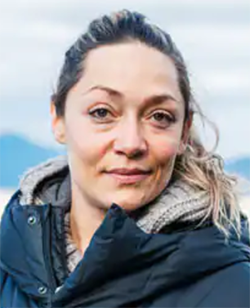