There were a lot of lasts at the 2018 PyeongChang Games, but there were also a lot of firsts, especially for rising athletes. As the Olympics come to a close, take a look back at some of the breakout stars of these games.

The 28-year-old figure skater who just missed the team in 2010 and 2014, finally got his chance to shine in Pyeongchang. After making his Olympic debut in the men's free skate during the team event, he quickly stole the spotlight and the hearts of viewers across the country. His witty comments off the ice matched his sass on the ice.

Another figure skater who left his mark on these Olympics is Nathan Chen. The 18-year-old skated in the men's short skate portion of the team event, helping Team USA snag bronze. However, these Games were quite the emotional rollercoaster for Chen. After starting the Olympics off with two of the worst short programs of his career, he quickly rebounded in his free skate. He made history by became the first male to land five clean quads in a single routine. Chen is proof that even if at first you don't succeed, try, try, and try again.

The first gold medal of the games for Team USA was won by Red Gerard. Could he have started his Olympic debut off any better than that? Gerard edged out Canada's Mark McMorris and Max Parrot to take home gold in men's snowboarding slopestyle. The 17-year-old from Colorado brought creativity to his runs and used features of the course that his competitors ignored. Although he did not medal in mens' big air, Red made history at PyeongChang and is the face of the future for snowboarding.
Share

Robert Johansson and his mustache

Norway's Robert Johansson made a name for himself in ski jumping. He won the bronze medal in the large and normal hill events as well as a gold for the team event, but something else caught people's attention. Not only is Johansson good at ski jumping, he's pretty good at growing an epic mustache, too. His mustache became an overnight sensation during the Olympic Games and maybe, just maybe, it's the key to his success on the slopes.
Share

17-year-old Chloe Kim became a snowboarding queen in PyeongChang. Kim dominated in the women's halfpipe, landing back-to-back 1080's in her final run to win her first gold medal. She became the youngest female medalist in snowboarding history. Not only did she catch people's attention on the slopes, but her tweets got people talking too. Chloe wasn't just hungry for gold, she was actually hungry. She tweeted mid-competition about how she could really go for some ice cream. She also let the world know the latest way to cure your nerves: just eat a churro.
Share

Maame Biney became the first African-American female to qualify for the U.S. Olympic speed skating team. Although her Olympic debut didn't go as planned as she was eliminated in the quarterfinals of the 500m, you'd never be able to tell she didn't win. Biney kept smiling. The 18-year-old remained upbeat and enthusiastic throughout the remainder of the games even though she wasn't going home with any hardware. Maame's father was her biggest supporter in PyeongChang. He went to every one of her races and cheered her on.
Share

Without the NHL's star players in the Olympics this year, it was time for new players to steal the spotlight. Team USA's Ryan Donato did just that. Ryan is the son of Ted Donato, who played for the U.S. men's hockey team in the 1992 Winter Games.  Like father, like son, Ryan clearly followed in his father's footsteps on the international stage. Ryan scored five goals in the tournament to surpass his dad's record of four goals in 1992. Even though the United States left empy handed and was eliminated from medal contention by the Czech Republic, Donato looks at his Olympic experience as something he can learn from.
Share

Another youngster who quickly stole the show in PyeongChang is Finland's Eeli Tolvanen. He put up nine points in four games, including a goal and three assists in his debut. The 18-year-old used the Olympic stage to showcase his talent on the ice to the world. In a tournament where the big stars were absent, someone had to step up to the plate, and that's exactly what Tolvanen did. Be on the lookout for him, whether it's four years from now in Beijing or two months down the road in Nashville. The 30th overall pick in the 2017 NHL entry draft may have impressed the Nashville Predators enough with his performance in PyeongChang to join the team as they make a push for the Stanley Cup Playoffs.
Share

Maia and Alex Shibutani became the first figure skaters of Asian descent and the first siblings to win an Olympic medal in ice dance. The siblings clinched the bronze medal for the United States in the team event free dance and the bronze for ice dance. The duo's rise to fame didn't come easy, as they had to overcome many roadblocks that other figure skating pairs didn't have to. Being siblings in a sport that is known for having romantic elements didn't faze the 'Shib Sibs'. Rather, they embraced their unique relationship and use it to their advantange. The pair has been skating together since 2004 and are the longest tenure pair for the U.S squad.

Ledecka became the first athlete to compete in two sports and win a medal in each of them in the same Games. That's right. She did what some would deem impossible. Ledecka's main sport is snowboarding, but in PyeongChang she figured she'd take a shot at Alpine skiing too. She shocked the world when she beat Lindsay Vonn at her own sport and took home the gold medal in the women's Super- G. Her victory was the first gold medal in Alpine skiing for the Czech Republic. Ledecka also won the gold medal in the parallel giant slalom. She's living proof that the impossible can be possible. Rock on, Ester.

Alina won the Olympic Athletes from Russia their first gold medal of these Olympic games. Not only did the 15-year-old win her country their first gold of the games, it was her first Olympic medal ever. She came in first place in the ladies free skate, and her best friend and fellow competitor, Yevgenia Medvedeva settled for silver. It's the first time since the Nagano Olympics 20 years ago that two skaters from the same country have gone 1-2 in the women's event. Alina may have beaten her best friend, but there is no animosity between the two. 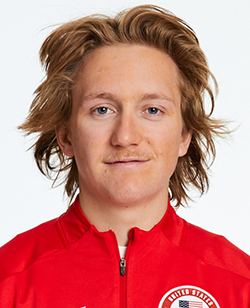