From Lindsey Vonn’s final Olympic medal to a snowboarder winning an Alpine skiing race, check out the best moments from the 2018 Winter Olympics Alpine skiing competition.

Everyone was surprised that Ester Ledecka won the Alpine skiing super-G gold medal.

The two-sport athlete from the Czech Republic, who also won the Alpine snowboarding gold medal in PyeongChang, had never finished better than 19th in a World Cup super-G.

So when she saw her time, .01 seconds faster than defending Olympic champion Anna Veith, she could not believe her eyes.

“How did that happen?” Ledecka asked, shaking her head.

Listen to the host-feed commentators, Charlie Brougham and Britt Janyk, who could not contain their excitement when they realized what Ledecka was about to accomplish. Watch until the end, when the cameraman informed Ledecka that she won the gold medal:

After the race, Vonn discussed the emotions of competing at her fourth and final Olympics.

"It’s sad," she said. "This is my last [Olympic] downhill. I wish I could keep going, you know? I had so much fun. I love what I do. My body just can’t — probably can’t — take another four years. But — I don’t know, I’m proud. I’m proud to have competed for my country. Proud to have given it my all. I’m proud to have … come away with a medal.”

Marcel Hirscher was already considered one of the best Alpine ski racers ever entering the 2018 PyeongChang Olympics.

But no Olympic gold medals.

Hirscher changed that by winning gold in both giant slalom and combined in PyeongChang.

Now he will never again be asked about being the best Alpine skier without an Olympic title.

“I'm super-happy because now this stupid question is gone away,” Hirscher said to NBC’s Alan Abrahamson. “If I'm thinking that my career is perfect without a gold medal, now this question is, zzz, deleted."

But the 2014 Olympic slalom champion finished fourth in the event in PyeongChang.

“I came into the Olympics as a multiple-medal threat, and I knew that, but I was also thinking on the plane ride over here that I could also literally walk away with nothing too, I could completely choke in every way possible,” Shiffrin said on “TODAY.” “So to be here sitting with you guys right now and having two medals is a relief but also just insane.”

Switzerland defeated Austria to win the gold medal in the Alpine skiing team event, which made its Olympic debut in PyeongChang.

The U.S. lost to Great Britain in the opening round.
Share

Highlights of Alpine skiing at the 2018 Winter Olympics 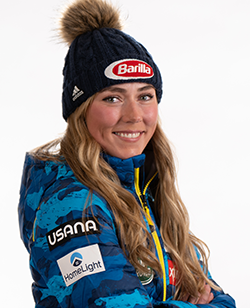