Justin Gatlin stood by the door of Trayvon Bromell’s hotel room with a mischievous look on his face. He knew exactly what would happen next.

Bromell strolled into his room and flipped the light switch. Nothing. He walked over to the desk and tried to turn on the lamp. Still nothing. Confused, he pressed the power button on the television. The screen remained black.

Gatlin struggled to contain his laughter as he watched the young U.S. sprinter. Gatlin let Bromell roam in the dark for several minutes until he finally revealed the secret to turning on the room’s electricity. Gatlin instructed Bromell to insert his key card into a slot by the door. Instantly, all of the room’s appliances came to life.

It was merely one of the many pieces of advice Gatlin has provided to Bromell, both on and off the track.

“He’s so green,” Gatlin said with a smile. “He’s so talented and yet so green at the same time.”

Bromell and Canada’s Andre De Grasse are showing promise of becoming the next faces of track and field’s marquee event. The two shared the 100m bronze medal at the 2015 World Championships after they both crossed the finish line in 9.92 seconds.

At the time, the two sprinters were just 20 years old and still enrolled in college.

“The future is bright for our sport,” Gatlin said. “Those two guys are going to be racing against each other for the rest of their careers.”

Bolt, who will turn 30 years old on August 21, and Gatlin, 34, have demonstrated their willingness to mentor the two up-and-coming sprinters.

De Grasse could not muster up enough confidence to talk to Bolt at the 2014 Commonwealth Games, where he first encountered the world’s fastest man.

De Grasse, who had only started sprinting competitively two years earlier, was not expecting to run in the 4x100m final. He assumed his Canadian coaches would pick more experienced runners for the race. But he suddenly found himself getting ready to run the race’s anchor leg, standing next to the six-time Olympic gold medalist, in front of a sold-out crowd in Glasgow, Scotland.

“I was pretty nervous,” De Grasse said. “You could tell.”

Sure enough, he did not finish the race after failing to receive the baton cleanly.

De Grasse finally felt confident enough to approach Bolt at the 2015 World Championships, as the two sprinters stood together atop the 100m podium. Bolt, who claimed the gold medal, enthusiastically congratulated De Grasse on earing the bronze medal.

“It was pretty overwhelming,” De Grasse said, “but he told me I’d get used to it.”

They had their longest chat when Bolt visited Los Angeles in October 2015. In addition to appearing on The Ellen DeGeneres Show, Bolt filmed a commercial on De Grasse’s collegiate track at the University of Southern California. They spoke there for more than 20 minutes before De Grasse had to go to his next class.

De Grasse now considers Bolt to be a mentor, but he has not let the relationship reduce his competitive spirit.

“[Bolt] wants to go out on a good note,” De Grasse said. “I want to see if I can beat him before he retires.”

Growing up, Bromell would spend hours dissecting videos of his favorite sprinters. When he got to the track, he would strive to replicate their strengths, from Gatlin’s explosive block starts to Bolt’s top-end speed.

Now Bromell is able to do much more than just watch footage of the world’s fastest sprinters. Before a Diamond League meet in Monaco in 2015, he asked Gatlin if he could join him to practice block starts. Gatlin does not usually practice with other top sprinters who are not in his regular training group, but he decided to make an exception.

“We had a great time,” Gatlin said. “He’s so quick out of the blocks.”

Bromell, who was nine years old when Gatlin won the Olympic 100m gold medal in 2004, is still trying to get used to racing against the sprinters he grew up idolizing.

“It's like running with your heroes,” Bromell said. “I never saw myself in this position when I was younger.”

Gatlin is amused by Bromell. They are both from Florida, and Gatlin describes Bromell as a “good ol’ country boy” who is “like a younger version of me.”

The two sprinters were both on the U.S. 4x100m relay team at the 2015 World Championships, with Bromell running the opening leg. But as the other runners rose into the set position, Bromell remained crouched with one knee on the track. He did not rise until just moments before the starting pistol was fired.

It turns out that Bromell was confused because he misheard the race starter’s “set” command. Bromell decided not to move at all until he looked back and saw that the rest of the runners were already in set position.

“He was this close to disaster, but he still ran so fast,” Gatlin said. “He sealed his fate as our leading guy for our 4x100m relay team for the next couple of years.”

“I learned from Justin to stay focused, and don't let the negativity get to you,” Bromell said. “Even after everything he's been through in life, he still has a smile on his face and keeps moving forward.”

Bromell and De Grasse are both 5-foot-9. They both won a pair of NCAA titles. They tied for the 100m bronze medal at the 2015 World Championships.

“It’s like we are the same person,” Bromell said.

The two sprinters became friends when they both made their international debuts at the 2013 Pan American Junior Championships in Colombia. They developed mutual respect as De Grasse claimed the 100m silver medal, while Bromell took home the bronze.

They exchanged phone numbers, and Bromell quickly began selling De Grasse on the idea of becoming collegiate teammates. Bromell was about to enter his freshman year at Baylor University, while De Grasse was looking to transfer out of Coffeyville (Kan.) Community College to a Division 1 program.

De Grasse was tempted to join Bromell. But after living in Coffeyville, De Grasse was desperate to be in a big city. He ultimately moved to Los Angeles to attend USC.

“We would have had a great 4x100m team,” De Grasse said. “We probably would have won the NCAA Championship.”

They continued to talk weekly via text message as they both dominated collegiate sprinting.

They met again in person in June 2015 at the NCAA Championships, and added another thrilling chapter to their rivalry. Bromell ran the fastest time in the 100m semifinal. De Grasse watched a replay of the race and realized he would need a faster start to win the final. He showed up to the track early the next day and practiced the first 30m of his race. It worked, as he shaved .23 seconds off of his semifinal time to win the 100m final in a wind-aided 9.75 seconds. Bromell finished second in 9.88 seconds.

Two months later, Bromell and De Grasse stood together on the 2015 Worlds 100m podium, receiving hugs from Bolt and Gatlin as international television cameras filmed their every move. They laughed about how far they had come since they first met in 2013 as relatively unknown sprinters.

“I don’t think anyone would have thought that two years later we would be bronze medalists at the World Championships,” De Grasse said. “That’s a story for the ages right there.” 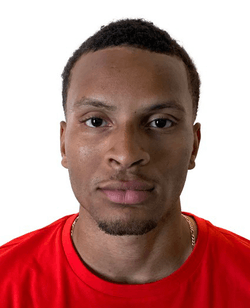