It looks like Kerri Walsh Jennings' advice paid off.

After a heart-wrenching loss in the semifinals, the world's No. 1 team found a way to get over the disappointment of missing out on a gold medal and instead took home the bronze. Which was exactly the message sent by Walsh Jennings after the U.S. indoor team lost to Serbia in the semifinals.

Walsh Jennings - one of the most decorated beach volleyball players in history - had only 24 hours to rebound from the heartache of losing in the semifinal and came back to win bronze with April Ross.

"I'm just really proud to be a part of this program," USA star Jordan Larson said. "It's come a long way. I'm just really happy because there are a lot of good people who deserve this. A lot of people just gave their hearts and soul to this."

"I have a whole new respect for everyone that wins a bronze medal," said U.S. setter Courtney Thompson, who was playing in her last Olympics. "It's not easy, 48 hours later."

USA coach Karch Kiraly missed out on a chance to become the first person to win a gold medal as both a volleyball player and coach. But after taking home bronze, he expressed his appreciation for Walsh Jennings' words.

"Our team dealt with some real pain and heartache, heartbreak, a couple of days ago," Kiraly said. "I'm incredibly proud of how, within hours, they were preparing, carrying that heartbreak, but preparing to be good and to finish strong. I also never had any understanding of how good a bronze medal could feel, and it feels incredible right now.

"We're so happy to finish this tournament on this note."

The U.S. women's team has now taken home a medal in three straight Olympics, claiming silver in London 2012 and Beijing 2008. The USA women have won three silver medals and two bronze, but have never won gold.

"In a way, selfishly, I wanted a gold medal to almost prove the way this culture is, or the way the culture has grown and the foundation that we've built, almost to prove it right - that the way we did it was right," U.S. captain Christa Dietzen said. "A medal's not going to prove that. A medal doesn't define this team. It will never define this team."

The Dutch squad, meanwhile, had the best tournament in the country's history, advancing to a medal game for the first time ever.

The Netherlands became a surprise medal contender throughout the tournament after making it back to the Olympics for the first time in two decades. The Dutch surprised the field, taking down No. 3-ranked China to open the preliminary round before battling the U.S. to five sets in prelims.

Get to know the Netherlands, the underdogs of the women's volleyball tournament in Rio

Get to know the Netherlands women's volleyball team, which has taken the world by storm as the underdogs in Rio.

The Netherlands entered the Rio Games as the No. 11 team in the world but rallied to 11 points in the prelims, second behind only the U.S. They marched on to take down South Korea in the quarterfinals before running into a red-hot China team in the semifinals.

Serbia and China play for the gold medal Saturday night at 9:15 p.m. ET.

Quotes from the Associated Press. 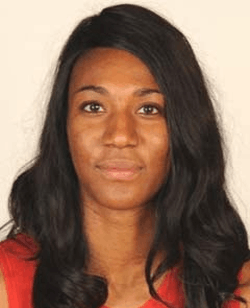