Heather Bergsma and Brittany Bowe were able to salvage what has been a disapointing 2018 Games, with a bronze medal in the team pursuit.

“I’m super happy to share this moment with these girls and all the girls from U.S. Speedskating," Bergsma said to the ISU.

The U.S. burst out to an early lead against the Canadians, taking a three-second lead at one point, but with two laps left slowed down substantially opening the door for Canada. In the final curve Mia Manganello almost fell, but was able to regain her balance to finish.

"At that point I don't think any of us could feel our legs. We gave it everything we had. We are just grateful we all stayed on our feet to get to that finish line," Bowe said to the media.

It is the first Olympic women’s speed skating medal since 2002 for the U.S., when Jennifer Rodriguez took home bronze in the 1500m.

The United States strategically raced for bronze in the semifinal against the Netherlands. The U.S. rested 1000m world record holder, Bowe, for the B Final, inserting Carlijn Schoutens in her place. Schoutens, a distance skater, carried the team throughout the six lap race, resting  Manganello and Bergsma for the bronze medal race.

Bergsma and Manganello have a chance to add to their medal haul in the the mass start on Saturday, Feb. 24. A medal in the team pursuit was just what Bergsma needed ahead of her final event in PyeongChang.

"I think we have a good opportunity there too. It's definitely a boost of confidence," Bergsma said.

In the Final A, Japan broke the Olympic record previously set by the Netherlands in the quarterfinal, to defeat the Dutch and win gold.

"Clocking this lap time at the Olympics will give confidence to all the Japanese people. I'm so happy to have achieved an Olympic record that a lot of young Japanese skaters could go for. For them, I'd like to chase after this record," Miho Takagi said to the media.

Japan and the Netherlands have been untouchable in the event recently, splitting every major competition since the 2014 Games.

Understandably, the Dutch skaters were not thrilled with silver.

"On one hand silver is a little disappointing but on the other hand I'm proud of the team and what we've achieved," Ireen Wuest said to the media.

The silver medal is Wuest's 11th career Olympic medal, two more than any other speed skater in history. 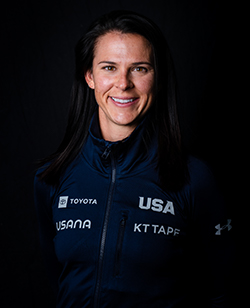