1519208820
at 1519208820 By: Tom Dougherty
Share this
Jessie Diggins and Kikkan Randall become the first American cross-country skiers to win an Olympic gold.

Jessie Diggins knew it was time to make a move if she wanted to end the United States' 42-year cross-country Olympic medal drought.

When she began her second lap Wednesday in the women's team sprint, there were too many skiers around her, and when that happens, accidents occur. Dreams are shattered. Goals go incomplete. Years of hard work go for naught. Medal droughts live in.

Diggins and her teammate, Kikkan Randall, had skied too conservatively in the semifinals – despite posting the fastest overall time. That carried over to the first lap in the finals, she said.

With that, the long wait was over. American cross-country skiing history was made and a 42-year Olympic medal drought ended. That moment put Diggins and Randall in the record books.

Diggins accelerated into another gear on her third lap, as she passed Norwegian skier Maiken Caspersen Falla and then out-sprinted Sweden’s Stina Nilsson to the finish line. Then, as she beat individual sprint gold medalist Nilsson to the line, she screamed and the celebration began.

The U.S. ended a 42-year Olympic cross-country medal drought Wednesday as Diggins and Randall became the first American cross-country skiers to capture a gold medal by winning the women’s team sprint at the Alpensia Cross-Country Centre in PyeongChang, South Korea.

“Hearing it out loud,” Randall said, “it still doesn’t feel real. It’s what I’ve been working on for 20 years and with this team, for the last five years and … wow. It’s just so fun to put it together.”

Sweden took home the silver medal and Norway walked away with the bronze.

“Just having it happen at a team event,” Diggins said, “means so much more to me than any individual medal ever would.”

This moment has been one in the making, especially with the women. Five years ago, Team USA won gold in the women's team sprint at the world championships with Diggins and Randall.

In Sochi four years ago, the U.S. made the women’s team sprint finals but finished eighth with Randall and Sophie Caldwell. Heading into PyeongChang, expectations were higher.

Through the first four women’s events in PyeongChang, Diggins was close – oh, so close.

On Wednesday, there was no almost with Diggins.

“I just felt unstoppable,” she said. “I am in the best shape of my life right now. That feeling of crossing the line and having Kikkan tackle me was the coolest thing ever.

“I have been working so hard for so long, the entire team has. Being so close to medals so many times this week, I knew I was in good shape and I knew it could happen.”

It happened and it came in an event that Norwegian skier Marit Bjorgen acquired a new title in the Olympic record books. Bjorgen, 37, now sits alone as the most decorated Winter Olympian.

The bronze medal was Bjorgen’s 14th Olympic medal, breaking the tie with fellow Norwegian and the King of Biathlon, Ole Einar Bjoerndalen. It was her fourth medal of these Olympics.

With one more women’s event left – the women’s 30km mass start Sunday – Bjorgen has one more shot at winning her eighth Olympic gold, which would move her into a tie for most ever.

This is Bjorgen’s final Winter Olympics. She confirmed that again after the team sprint.

“If someone told me (in 2002) I would be standing here, that I would be skiing here,” Bjorgen said, “I would have thought it was not possible. But I am here and still fighting for medals.

“My first gold in Vancouver was special. I’d had some problems for three years and then came back again at a high level and fighting for all the medals there. That was special for me.”

Bjorgen and Falla secured Norway’s 12th cross-country medal of these Games, and 30 minutes later, Norway got its 13th medal with its sixth cross-country gold in the men’s team sprint.

Falla’s bronze was her second of these Olympics. She won silver in the individual sprint.

The silver was Swedish skier Charlotte Kalla’s fourth of these Games and the third for Nilsson.

Cross-country has two days off before returning Saturday with the men’s 50km mass start, but for the next 48 hours, the American women can enjoy this gold.

"I was (like), 'Did we just win the Olympics?'" Diggins recalled asking Randall after the race ended. 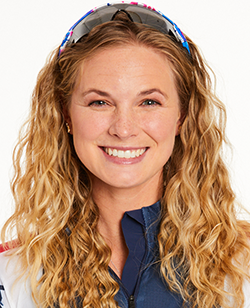