The 20-year-old was one of the youngest in the field and has been steadily working his way up the ranks in the years before Rio. He was too young for the 2012 London Olympics, and made his world championships debut in 2013 with a an eight-place finish. In 2014 he won his first world championships medal, a bronze, and in 2015 improved to silver.

In Rio, it was time for gold.

After the final scores were announced and Hancharou was still on top, he was heavily congratulated by the two runner-ups from China, Dong Dong in second place and Gao Lei in third. Dong was the Olympic champion in 2012 and Gao was the 2015 world champion.

Dong won a bronze at the 2008 Beijing Olympics and now has an Olympic medal of every color.

Gold actually wasn't Hancharou's goal for Rio, he told the International Gymnastics Federation in 2015. When asked what he hopes to earn at the Olympics, he said, "Maybe silver! I want to go gradually. Silver in Rio, and then after that, maybe gold."

He also said that one of his biggest inspirations in the sport is Dong, who he described as "very great."

Hancharou began trampoline at age six. "The coach from the sports school was recruiting young kids in the first grade from around schools," he said, "and I liked the idea. It was very simple."

The sole U.S. man in the field, Logan Dooley, completed two clean routines to finish 11th in the qualification round. He did not advance to the eight-man final.

The highest ever Olympic finish by a U.S. athlete is 7th, set by Savannah Vinsant in 2012. But Dooley's 11th place was the highest ever finish for a U.S. man. 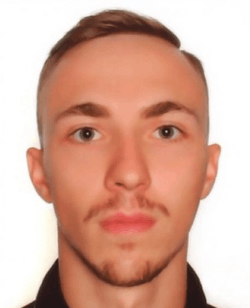