Simone Biles’ run of gymnastics dominance is unprecedented in the sport: she was the first female gymnast ever to win three consecutive all-around world championships titles, and holds the record for most world championships gold medals (ten) won by a female gymnast. She hasn’t lost an all-around competition since the summer of 2013, making her a heavy favorite for the Olympic title in Rio. She’ll also be looking for medals in the team event, beam, floor and vault finals, which means she could make history again by winning five golds in a single Olympics.

Who is... Simone Biles

Simone Biles could win five gold medals in Rio, but she's already being called the best female gymnast that ever lived.

His nickname is “Superman,” he’s won six straight world championship all-around titles and he’s the reigning Olympic all-around champion. Many agree that he’s the best male gymnast ever, and he can cement his reputation by becoming the first gymnast since Sawao Kato in 1972 to successfully defend his Olympic all-around title. But Uchimura’s top priority, he says, is the team competition. The Japanese men finished behind their Chinese rivals at the last two Olympics and are determined to claim gold in Rio.

Mikulak will head to his second Olympics as the best male gymnast in the U.S., with four straight all-around national titles to prove it. He helped the U.S. men win a team bronze at the 2014 World Championships, but has yet to break onto the podium on the world’s stage: his best all-around finish was sixth at the 2013 World Championships. Mikulak's goals for Rio are lofty nevertheless. He’s said that he hopes to be the one to dethrone Japan’s Kohei Uchimura in the Olympic all-around.

U.S. gymnast Sam Mikulak shares his personal motto, drink of choice and the secret meaning behind his tattoo.

After a string of defections in the early 2000’s, Cuban gymnasts were not permitted to travel to competitions like the Olympics or world championships. That policy has slowly changed in recent years, and Manrique Larduet will be the first Cuban gymnast at an Olympics since 2004. A stylish and outgoing performer, 20-year-old Larduet won’t be making history quietly. He’s a serious contender for the all-around podium, having won silver behind reigning Olympic champion Kohei Uchimura at the 2015 Worlds. He also should put on a show with his thrilling horizontal bar routine, which won him Worlds bronze last year.

Brazil’s Flavia Saraiva is 4-foot-4 inches of pure charisma, and she’s the gymnast most likely to steal the show in Rio. She’s been a fan favorite since she won three medals, including all-around silver, at the 2014 Youth Olympics, and the now-16-year-old made the all-around final at her first world championships in 2015. Her best events are balance beam, where she shows confidence and elegance beyond her years, and floor exercise, with a charming and playful routine that should get the home crowd and visitors alike roaring when she performs at the Olympics.

Top athletes to watch in Rio 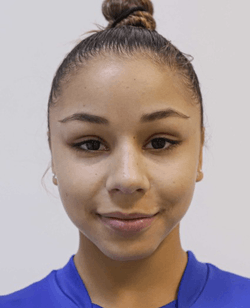