One year after becoming the youngest world champion in U.S. history for wrestling, 20-year-old Kyle Snyder is now the country's youngest Olympic champion in the sport.

Snyder defeated Khetag Gazyumov, the world No. 3, in the men's 97kg freestyle wrestling final by a score of 2-1 to win gold in his Olympic debut.

It's the first (and only) gold for the U.S. in men's wrestling at these Olympics, and the nation's third medal in wrestling overall. Earlier this week, Helen Maroulis won gold in women's wrestling and J'den Cox took bronze in men's freestyle.

Snyder's excellent conditioning was on display throughout the tournament as he battled hard through his four matches, with his opponents often looking worn out late in matches during the later rounds.

The gas tank was clearly on display in Snyder's semifinal match with Georgia's Elizbar Odikadze. It looked as though Snyder could be in trouble when the world No. 6 scored an early four-point takedown on him and took a 4-0 lead into the break between periods. Then Snyder came out and dominated the second period, as an exhausted Odikadze could do nothing to prevent Snyder from getting hold of his leg and forcing him to step out. Three step outs cut it 4-3, then Snyder hit a takedown to tave over the lead. The match ended with a 9-4 advantage to Snyder.

"It was good," Snyder said of his match with Gazyumov. "That guy beat me a month ago, so any time you can avenge a loss, keep improving, it's good stuff."

Gazyumov would wind up taking the silver, his third career Olympic medal. The Azerbaijani earned bronze at his two prior Olympic appearances in 2008 and 2012.

Earlier in the day, Snyder won his first two matches by a combined score of 17-3.
Share

The two bronze medals in the 97kg division were won by Romania's Albert Saritov and Uzbekistan's Magomed Ibragimov.

Ramonov had no issue putting points on the board all day long, outscoring his five opponents by a 53-11 combined margin. In the final, he recorded an 11-0 win by technical fall over Azerbaijan's Toghrul Asgarov, a 2012 Olympic gold medalist.

It's been a turbulent season for the Russian team, which had to wait to find out if they would even be allowed to compete in Rio because of the doping scandal surrounding the country.

"It was a terrible situation before the decision to let us compete," Ramonov said. "The atmosphere in our team was very nervous and we were worried and watched the news every day to know what was going on. When they let us compete, it was already a victory for us and it gave us extra motivation."

The 65kg division nearly provided an additional medal for the United States.

Frank Molinaro won his first match before running into Asgarov in the quarterfinals and getting teched before the end of the match. With Asgarov making it to the gold medal match though, Molinaro got pulled into the repechage to keep his medal hopes alive.

After wrestling back to win his repechage bout against Ukraine's Andriy Kvyatkovskyy, Molinaro slotted into a bronze medal match against Italy's Frank Chamizo, the reigning world champion. Molinaro had a gritty performance against the world No. 1 but came up just short. The match ended 4-3 before Chamizo was awarded an extra point on a failed challenge from the American corner.

Kvyatkovskyy was part of the reason that Molinaro was in Rio in the first place this week. Molinaro only got into the Olympic field after Kvyatkovskyy and another wrestler, Poland's Magomedmurad Gadzhiev, had their quota spots revoked due to a positive test for meldonium. Changes to the minimum threshold for a positive test eventually allowed both wrestlers to regain their quota spots, and in an interesting twist of fate, Molinaro ended up facing both of them in the tournament — first Gadzhiev in the Round of 16, then later Kvyatkovskyy in the repechage. In fact, Molinaro's only two wins on the day came against them.

The other bronze medal match in the 65kg division featured one of the wildest finishes imaginable. Mongolian wrestler Ganzorig Mandakhnaran believed he had won the match and began to celebrate with his coaches, but the referee awarded a penalty point to his opponent, Uzbekistan's Ikhtiyor Navruzov, that gave Navruzov the victory. The Mongolian coaches ran out onto the mat to protest the call and began stripping off their clothes. 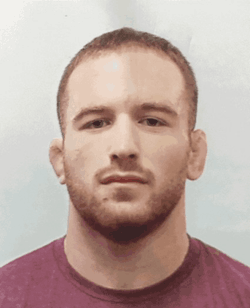