John Shuster was about to take an Olympic-defining shot.

The United States men’s curling team was tied with Canada 7-7 in the 11th end early Monday morning. Shuster, the U.S. skip, had a chance to clinch an upset victory over the pre-tournament favorites and keep his team’s playoff hopes alive with a perfect final attempt.

Shuster glided forward and released his shot. The stone narrowly missed a guard, bounced off a Canadian rock in the scoring zone and came to a stop right on the button, securing the United States victory.

"It was fun to go out there and be the team and the player that got us here and that we've worked so hard to be,” Shuster said following the win.

Shuster, who is making his fourth Olympic appearance, has struggled throughout the tournament. Entering the game against Canada, the United States was the worst shooting team in men’s round robin play and Shuster had converted on just 73 percent of his attempts, lowest among all Olympic skips. Sweden's Niklas Edin is leading the tournament in that category with an 86 percent success rate.

But Shuster shot a team-best 83 percent to lead the United States to the win over Canada on Monday.

He was overcome with emotion following his game-winning shot.

“The Olympics has been so tough for me,” Shuster said while fighting back tears to NBC’s Trenni Kusnierek.

Shuster didn't explain exactly where his emotion came from, but mentioned being inspired by Dan Jansen, the U.S. speed skater who persevered through emotional turmoil to win a gold medal at the 1994 Winter Games in Lillehammer.

“This isn’t my story,” Shuster said about his play to begin the Olympics. “My story isn’t what’s been happening so far.”

“There’s a reason why we play with him and why we stick with him,” George said to Kusnierek. “What you saw today is what we know he is. To come out when everything is going against you, against the best in the world, to play the way that he did and the way we did today, there’s no bigger testament to someone’s character than that.”

The victory keeps the United States in the playoff hunt. It now sits at 3-4 and is in seventh place of the round-robin standings with two games remaining. The teams with the four best records will play in the semifinal round Feb. 22

“To come out here and get a win against the class of the field (Canada) was very big for our team and gives us momentum going forward,” Shuster said. “It always feels good to make the last (shots) and execute.”

John Shuster has won six national championship titles from 2003 to 2017.

Sweden and Switzerland lead the field with 5-1 and 4-2 records, respectively, while Canada and Great Britain are tied for third at 4-3.

The U.S. must win its final two matches against Switzerland and Great Britain to have a chance at securing a spot in the semifinals.

Gear up like Mikaela Shiffrin and your favorite Team USA Olympians!

The United States has not won an Olympic curling medal since 2006, when it captured bronze in Torino. Shuster was a lead on that team.

"Beating a team of the caliber of Canada is the start of redemption for me,” Shuster said. “But we have a couple of more games here to finish the round-robin and hopefully get the help we need to get into the medal round.” 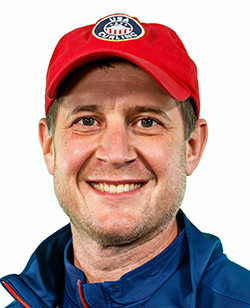