A stalemate for the majority of the first round, Muhammad snuck in a head kick to end the round on top.

In the second round, both competitors gave up points for falling, then Cisse tied the match with a spinning body kick.

With little time remaining in the final round, Muhammad went up two points by landing a body kick, sending his man out of bounds.

Cisse pressed on, and delivered a head kick with one second left to steal the gold medal from the British fighter.

The 22-year-old Ivorian sprinted around the arena as soon as he realized what he had just done. Muhammad ripped his head gear off in disappointment.

A relatively slow start, Niare landed the only strike of the round, a late head kick.

The French fighter got a quick body shot to increase her lead in the second round, but Hye-Ri landed a flurry of head kicks, while knocking Niare to the ground to gain a six point lead.

Niare was attacking the whole final round, scoring a body kick and a head kick to cut the lead significantly, but ultimately came up short when Hye-Ri could flee strikes and burn the clock.

Gbagbi started it off with an early head kick, but Azizova got a point back with a thunderous body kick.

In the second round, the Ivory Coast native landed another vicious head kick and a body kick to take a considerable lead in the match.

The final round was a defensive demonstration from Gbagbi, who didn't concede a point or register a strike.

Oueslati jumped out to an early lead in the first round, scoring on two smooth head kicks. Lopez grabbed a point when the Tunisian went out of bounds.

It was more of the same in the second round with Oueslati landing another head kick and body shots.

Lopez gave it everything he had, but Oussama Oueslati's length was too much to handle.

Halfway through the first round, Chuang landed a head kick and immediately beamed a huge smile.

There were no registered strikes in the second round.

In the third round, Tatar got on the board with a body kick, and then landed two head kicks to steal the match from Chuang.

Harchegani struck Pazinski in the face with a head kick early, and later scored a body kick to end the first round up by four.

It was more of the same in the second round, as Harchegani scored a body kick and head kick back to back. He finished the round with a nice push kick to the body.

Right away in the third round, Harchegani lands yet another head kick to win on point gap. 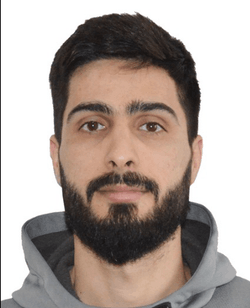