Hanna Oeberg did all she could.

She was perfect in her shooting bouts, and she skied just as fast.

And that was more than enough for the Swede to capture her first Olympic gold medal.

Oeberg finished the women's 15km individual Thursday in 41 minutes, 7.2 seconds to score an upset win in the event at the Alpensia Biathlon Centre in PyeongChang, South Korea.

"I was really focused on the range today," Oeberg said. "The skiing was great also. I do not know, I managed it just today. I have shot four times clean only one time before, that was when I won the junior world championships."

Still, Dahlmeier found her way onto the podium for the third straight event. She finished 41.2 seconds behind Oeberg. Her bronze medal is Germany's fifth biathlon medal of the PyeongChang Games.

"It was good to be on the podium again," Dahlmeier said. "Third race, third medal. I am very happy about the bronze medal, especially in the individual race. It is a really hard race and I had one miss at the first shooting.

"No, (it's not a disappointment). It is the Olympics and I have already two gold medals. It is amazing for me. At the moment, I have my top shape of the year. This was my aim."

Oeberg was one of 87 biathletes to shoot clean in the 15km individual. She becomes the first Swedish woman to win the event.

Susan Dunklee, in her second event of the PyeongChang Olympics, performed much better than her first. Dunklee finished in 19th place of the women's individual Thursday.

Dunklee failed to qualify for the women's pursuit after finishing in 66th place of the sprint last Saturday. 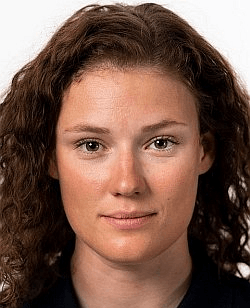