Sangfroid (from the French): Composure or coolness shown in danger or under trying circumstances; self-possession or imperturbability, especially under strain; literally “cold blood.”

Gabriella Papadakis and Guillaume Cizeron are making their Olympic debut in PyeongChang and are seen as medal favorites. They are likely to contend for gold up against rivals Tessa Virtue and Scott Moir from Canada.

Papadakis, 22, and Cizeron, 23, from France have skyrocketed to the top of the ice dance game in the past few seasons. They vaulted from 13th at the 2014 World Championships (against a weakened field, without the 2014 Olympic gold or silver medal-winning teams present) to winning the title in back to back years in 2015 and 2016. Most attribute the upgrade to their new training site in Montreal.

At the 2017 World Championships, Papadakis and Cizeron were second to Virtue and Moir – their training mates, no less. Virtue and Moir won ice dance gold in 2010, silver in 2014, and have three world championship titles on their resumes. Virtue and Moir are featured in commercials all over Canada in various ways, which surely can be pulled into the French team’s subconscious while training in Montreal.

Figure skaters often train with their biggest rivals - but why?

It would be like the Patriots and Steelers sharing a practice field, or the Lakers and Celtics working in the same gym.

Can anyone predict the ice dance podium for PyeongChang? "It feels like a coin flip, but instead of luck it’s going to be focus."

So far this season, the French and Canadian teams have traded high scores. The French team has cracked the 200-point mark, never before seen in ice dance.

At their first head-to-head competition, the Grand Prix Final in December, the French won over the Canadians by 2.3 points.

Then in January, Papadakis and Cizeron won their fourth straight European title. Their momentum was brewing.

Papadakis and Cizeron stayed at home during the early parts of the Olympics to get some training time in, and to stay inside their “bubble.” They traveled to PyeongChang a few days early and are treating the Olympics just like any other competition.

Their contemporary and lyrical style, most evident in their free dance set to Beethoven’s Moonlight Sonata, makes them different from almost every other team. The ice dancers put it in their own words:

“The ice brings this sort of airiness and fluidity that you can't really do on the floor. We try to make the most of that,” said Papadakis.

“What we do with our feet on the ice, the energy comes out of it,” Cizeron added. “It feels like the arms are just an extension of what we do with the feet, [the arms] are not like something added. It's not like [the arms] comes and bothers the rest. We go with the flow. Where our feet want to go, it just projects to the rest of the body.”

Gabriella Papadakis and Guillaume Cizeron are the French ice-dance pair breaking records as they prepare to challenge for Olympic gold.

France has not won an ice dance medal since Marina Anissina and Gwendal Peizerat struck gold in 2002.

The final flight of teams in the short dance starts with Virtue and Moir. Then, it’ll be Papadakis and Cizeron’s turn to take the ice, with as much sangfroid as they can muster. 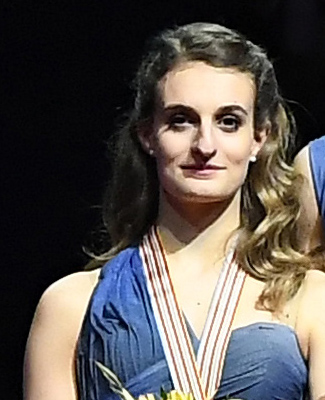