When Martin Fourcade arrived for his first shooting bout Tuesday, Arnd Peiffer had already missed a target. Then another. And that enormous lead Germany had built, it was gone.

Fourcade shot clean and showcased his speed on the skis to send France to a gold medal Tuesday in the second-ever mixed relay at the Alpensia Biathlon Centre in PyeongChang, South Korea.

With the gold, Fourcade is the first athlete to win three gold medals at the PyeongChang Games and establishes himself as the best French Olympian – Summer or Winter – ever with five gold medals.

"Winning this medal together is something really emotional and we really enjoy (it)."

Norway, who won gold in the mixed relay's debut at Sochi four years ago, took home the silver medal and Italy captured the bronze medal.

Germany, despite Laura Dahlmeier building a huge lead for her teammates on the second leg, failed to make the podium.

The 29-year-old Fourcade clinched the gold on his second shooting bout, another clean slate, while Peiffer missed three more targets. When Fourcade left the second range, it was cruise control to the finish.

Fourcade finished his 7.5 kilometers 20.9 seconds ahead of Norway's Emil Hegle Svendsen. He began the leg 27.3 seconds behind Peiffer.

Norway, after the second exchange, erased a major deficit to find its way back on the podium thanks to Johannes Thingnes Boe and Svendsen's skiing and shooting. Marte Olsbu and Tiril Eckhoff skied the first two legs for Norway.

“It was a very good fight on the last leg,” Svendsen said. “I had no chance on Martin, but I’m happy to catch the silver in front of Germany and Italy. Now we go and do a big party.”

Italy's Dorothea Wierer had been neck-to-neck with Dahlmeier on the second leg but two misses on her second shooting bout opened it up for Dahlmeier to pull away.

Dahlmeier gave Erik Lesser a 29.9-second lead to work with. Lesser then built it to a 32.2-second lead when he tagged in Peiffer, whose five missed targets will leave Germany believing it costs itself a medal.

Dominik Windisch, of Italy, edged Peiffer at the finish to push Germany off the podium. Lisa Vittozzi and Lukas Hofer also got a bronze as part of the Italian team.

Germany filed an official appeal that Windisch interfered with Peiffer heading into the final 500 meters, but the race jury declared there was no evidence of obstruction.

"It was really emotional because I did everything to win this medal for the team," Windisch said. "I was sure to do the right thing, because (Peiffer) was behind me and normally, the rule is who is in front can choose the line so it all happened really fast.

"I tried to do the right thing and yes, I'm happy the decision was ours."

"I didn't expect the result, the decision," he said. "My experience is that there is not so much courage to change (from the jury) to change the positions around. In my view, there was a rule that was broken and now there is no consequence.

"Dominik was faster, but he broke a rule and there is no consequence. That's not good for the future because maybe every athlete thinks, 'I can change the corridor, it's no problem."

Peiffer was a late substitute for Germany. He replaced Simon Schempp, who missed the relay because of a sore throat.

Biathlon has two more events left in PyeongChang, with the women’s 4x6km relay Thursday and the men’s 4x7.5km relay Friday. Both events begin at 6:15 a.m. EST. 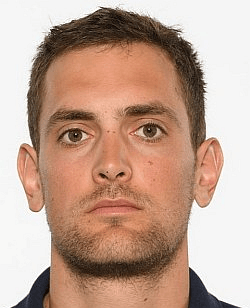