Al-Deehani, 49, is of Kuwaiti descent, but sanctions forbid the nation from participating in the Olympics. This is the first Olympic gold medal for the IOA, and first medal since the 1992 Barcelona Games. All of the medals have come in shooting competitions.

A solider in Kuwait, Al-Deehani ruled himself out of being the IOA flagbearer during the Opening Ceremony. “I am a military man and I will only carry the Kuwait flag,” Al-Deehani said.

Al-Deehani won bronze in the event at the 2000 Sydney Games, and another bronze in single trap at the 2012 London Games while competing for Kuwait.

Innocenti fell behind early in the final, and Al-Deehani was rock-solid keeping the lead throughout, firing quickly and confidently.

Al-Deehani led the semifinal the whole way, and when he made the gold medal match while the rest of the field was still to be determined, his celebration caused a distraction. He was subsequently given a yellow card for his actions.

The bronze medal match was a showdown between two Great Britain competitors, Steven Scott and Tim Kneale. Steven Scott, 31-years-old, shot a perfect 30 for 30 to defeat his 33-year-old compatriot and take home the bronze.

In order to get to the bronze medal match, they both needed to get by the number one ranked James Willett of Australia in a sudden death shoot off.

Willett (along with German shooter Andreas Loew) set an Olympic record in qualifying by scoring 140, but struggled in the semifinal and missed a target on his first try of the sudden death shoot off. 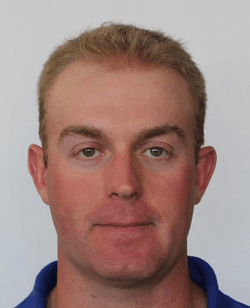