RIO DE JANEIRO (AP) — Australia absorbed the expected early battering from New Zealand before winning the first Olympic gold medal in rugby sevens with a 24-17 victory in the women's final on Monday night.

Rugby is back in the Olympics for the first time since 1924, but in the condensed sevens format and with men's and women's competitions.

The world sevens series-winning Aussie women took the first Olympic honors in 92 years with an unbeaten run in Rio de Janeiro, setting it up with two tries in each half to establish a 24-5 lead.

Kayla McAlister scored the first try for New Zealand but the Australians rallied with tries from Emma Tonegato and Evania Pelite before half-time.

Tonegato's early equalizer was contentious after she appeared to fumble the ball as she crashed over in the corner, but referee Alhambra Nievas awarded the try after checking with both assistant referees.

A yellow card for New Zealand star Portia Woodman at the end of the first half resulted in a significant momentum swing for the Australians.

Pelite ran on to a long, floating pass from Alicia Quirk and scored in the corner on the stroke of halftime, moments after Woodman was sin-binned for a deliberate knock-on.

Ellia Green and Charlotte Caslick scored for the Australians, extending the lead to 19 points, before New Zealand cut the margin with a second try for McAlister and another for Woodman, her 10th of the tournament.

Canada won the bronze medal with Ghislaine Landry scoring two tries and landing four conversions in a 33-10 win over Britain.

The Canadians, stung by a 22-0 loss to Britain at the end of the group stage and coming off a semifinal loss to Australia, started strongly and took a 26-5 lead at half time to set up the victory.

This was the inaugural Olympic women’s rugby sevens tournament

The men's tournament kicks off Tuesday.

How to watch USA Rugby at the 2016 Rio Olympics 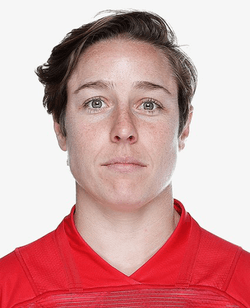